Nine-year-old Elisabeth O’Brien will go to Disney World with “Kidd’s Kids” and celebrate a “a big awareness day” for Ehlers Danlos Syndrome. 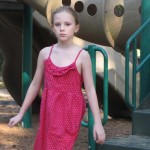 “A 9-year-old “Kidd’s Kid” from Socastee and her family are going to Walt Disney World in November, thanks to the generosity of a morning radio show’s listeners on the Grand Strand and nationwide.

The foundation established in 1991 by the late namesake of the “Kidd Kraddick in the Morning” national show, which airs locally 6-10 a.m. Mondays-Fridays on Qantum Radio’s WWXM-FM “Mix” 97.7, will include Elisabeth O’Brien. The 9-year-old was diagnosed last year with a brain aneurysm, along with Ehlers Danlos Syndrome, a connective tissue disease – as described by the Mayo Clinic of Rochester, Minn. – inherited disorders affecting mainly one’s skin, joints and blood vessel walls.

Ron Roberts, WWXM’s program director, said Tuesday that the dozens of stations carrying the radio show will celebrate “Kidd’s Kids Day” on Wednesday in their own way to raise money to help the cause, giving many youngsters, that is, all selected “Kidd’s Kids,” with terminal and chronic illnesses a paid five-day family trip to Disney World in Florida. He called the occasion “a big awareness day, a big fundraising day.”

Roberts said besides promoting the foundation “all day” Wednesday on the air, WWXM personnel also will rotate with remote broadcasts among the four local Murphy Express gas station convenience stores in morning and afternoon drive shifts, 7-10 a.m. and 4-6 p.m., respectively, and canisters are set up for donations at all four sites.

Elisabeth said in visiting Disney World with her parents, Jason and Julie O’Brien, and siblings Leeland, Madeline and Katelyn O’Brien, she looks forward most of all to “meeting the princesses.” Her mother also voiced her eagerness to share in the park rides with the children.”

This is a great opportunity for Elisabeth to go to Disney World and promote EDS Awareness.