Allison is there for her two children  as they face and continue their struggle with symptoms of Ehlers-Danlos Syndrome. 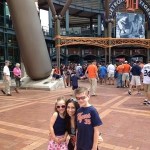 “Rupp, who recently moved to Livonia from Westland, is an inspiration to her cousin, Katie Patterson, communications specialist for Livonia Public School, who recommended Rupp to the Observer for a Mother’s Day feature.

“Allison is a phenomenal mother,” Patterson said. “She loves her children so completely, and she is so involved in their lives, even though her EDS limits her in ways.

“It would be easy for Allison to grow bitter and resentful of the things she can’t do because of her disease; instead, she allows her struggles to strengthen her spiritually and mentally. Her loving example is evident in her children, especially when they play with their younger cousins. She inspires me to be a better mother to my own children.”

Rupp will spend Mother’s Day reunited with her children after spending April 30 to May 6 with her husband Andrew in Lourdes, France, on a healing pilgrimage.

Rupp was one of about 50 sick individuals who accompanied the Federal Association of the Order of Malta on its 2014 international pilgrimage to the Marian Shrine at Lourdes, France. Archbishop Allen Vigneron of the Archdiocese of Detroit traveled with the group. Rupp was nominated by a Knight of Malta that her father knows.

“I never dreamed I would be chosen, but apparently dreams come true,” she said.

Everybody who goes to Lourdes is healed, she said, whether it’s physically, emotionally or spiritually. “It may not even be recognized during the visit, but maybe weeks or months later. You’re changed.”

Allison Rupp, 31, of Livonia shares a special bond with her children that not many mothers do – they all have the same inherited disorder: Ehlers-Danlos syndrome.

EDS is a degenerative disease that impacts the elasticity and strength of the body’s connective tissues, primarily skin, joints and blood vessels. People with EDS are prone to painful dislocations of their joints, and complications can be life-threatening.

Rupp has undergone 12 surgeries in an effort to help her better manage her EDS, including, most recently, a procedure to fuse vertebrae in her neck.

Daughter Lila, 5 1/2, a kindergartner at Our Lady of Good Counsel in Plymouth, wears five braces at night to limit her range of motion while she sleeps. Noah, 8, a second grader, suffers from shoulder dislocations.

“With the kids having the same genetic defect, it hits me hard as a mother since I deeply know the pain and medical difficulties they will face and continue to struggle with throughout their lives,” Rupp said. “ I could handle my hip dislocating far more easily than watching my child go through it.”

But, on the positive side, she said her kids can always count on her to understand. “They don’t ever have to feel alone in their struggle.”

Rupp said there are days she isn’t up to the task of parenting because of the pain and fatigue that come with Ehlers-Danlos syndrome. That’s when her mother and mother-in-law, who lives in Ohio, step in to help until she regains her strength.

“My routine is to drop the kids off at school, go to Mass, then go home and sleep until the kids need to be picked up,” she said. “I do this so that I have the strength to do homework and dinner and the dishes or a load of laundry. Then bedtime with my kids.”

Rupp said she has learned to accept that she has limitations, and she doesn‘t try to be supermom.

“I work hard at finding the little joys in my day instead of the to-do list to find my purpose and worth,” she said. “I hope that I’m teaching them that just because life doesn’t turn out the way you planned doesn’t mean you can’t find new dreams and happiness in the life that you are living.”

She said her most treasured parts of the trip were the baths, candlelight Mass and vigils at the grotto, where the Virgin Mary is said to have appeared in 1858 to a very poor 14-year-old girl.”

“It hits you in a raw way that makes words useless, only tears seem to come,” Rupp said. There is a serenity and love that emits from the flicker of the candles, hymns of Ave Maria and the hush of the river Gave (de Pau.) Beautiful seems so bland a word. It was once described as a ‘place fixed between heaven and earth.’”

Rupp hopes to take her children there some day, so they too may experience healing.

“Being with the Blessed Mother has given me a new glimpse into what all encompassing love she had for her son,” she said. “She understands and hears every mother’s prayer.”

Lila and Noah are so blessed to have a mother who understands what they are going through as they deal with their EDS.

Click here for a link to the original article