Many groups in the US and Canada are promoting EDS Awareness in their local communities during the month of May. 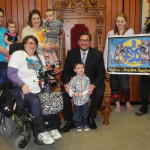 “In 2012 when local hearts were captured by the story of Erika Crawford, her rare medical condition and her fight to get a potentially life-saving surgery in the U.S., no one had a clue how many other locals were dealing with the same issue.

Ehlers-Danlos Syndrome, or EDS, is a rare, particularly difficult-to-diagnose genetic disorder with no routine screening test and no cure. But this week eight people with EDS, who had never met together before, gathered to help proclaim the city’s first Ehlers-Danlos Awareness Month.

“We didn’t know how many of us there were in town,” says Darlene Shafer, 44.

Shafer was finally diagnosed with EDS when she was 12, after her own doctor thought she was simply clumsy.

“I dislocated things and tore ligaments. I’d fall in a hole that wasn’t even there and my parents kept telling the doctor, ‘There’s something wrong with this child!'” Shafer says.

Most doctors have never seen a case of EDS and it wasn’t until she saw a specialist in Hamilton that Shafer got her diagnosis.

Since EDS is a disorder with six categories and a wide variety of symptoms, those with it rarely look just like another sufferer.

In the well-known case of Erika Crawford, the teen and her family pursued a cutting-edge surgery technique in the U.S. where one of her ribs was removed and shaped to help hold up her skull. The community raised about $100,000 to help pay for the surgery and trips after the family was denied OHIP coverage.

The locals who met with Shafer at city hall for the awareness event — Paul Willson and his children Peyton, 2, and Brodie, 3; Melanie Crawford and her son Eli, 3; Caroline Smith; and Willow June — connected through EDS Ontario or EDS Canada websites and communicated online.

“We’re talking about starting our own group here in town,” Shafer said. She believes there are another half dozen EDS sufferers in the area.

“Every one of us is different. Some have seizures or mitrovalve prolapse or tethered cord syndrome. Some of us plateau off and some don’t. We don’t fit neatly into a box.”

Shafer and others sometimes refer to themselves as zebras since doctors are instructed with an old adage, “If you hear the sound of hooves, think of horses, not zebras.”

“We’re the exception to the rule. We’re zebras!”

Having an EDS Awareness month proclaimed by the city will help bring more attention to the problem and acquaint more in the medical profession with the syndrome, Shafer said.

“We want doctors to understand what they might be looking at because, unless you’re in a large city like Toronto, most doctors just don’t know. The more awareness we can raise, the better it is for the whole EDS community.”

There’s no cure for EDS but a proper and early diagnosis can help patients through proper monitoring and potentially life-saving emergency medical plans.”

For more information on EDS, go to www.ehlers-danlossyndromecanada.org.

We need to promote EDS Awareness activities all year long, so that more people hear about this Rare Disease.