Diana has been working continuously as an advocate for those with Ehlers-Danlos Syndrome. 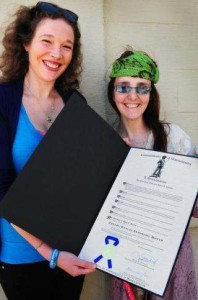 “Thanks to the efforts of a Newburyport woman, the governor has declared May as Ehlers-Danlos Syndrome Month in Massachusetts.

Diana Cleaveland, who was diagnosed in 2010 after years of wondering what was wrong, has made it her mission to raise awareness of the genetic condition.

“I was sick my whole life, and nobody knew why,” she said.

Ehlers-Danlos syndrome is a group of incurable disorders that affect connective tissues in the body, according to the National Institutes for Health. Approximately 1 in 5,000 people is born with one of the six major types of EDS.

Symptoms range from loose joints to life-threatening complications. Most people with EDS experience an unusually large range of joint movement, according to the NIH.

Cleaveland, 51, who was born with dislocated hips, has suffered a variety of ailments throughout the years, including a bleeding ulcer around age 9 and ovarian cysts and hematomas after she had her daughter. She  recently underwent ovarian and brain surgery.

“I went from a slow degrading to all of a sudden falling off a cliff,” said the former singer, songwriter and violinist.

But she stays positive by trying to help others with the condition and through the support of her husband, Craig. She also runs a Facebook group that connects people with EDS and is the director of communications for the Ehlers-Danlos New England/MA Support Group, where she recently met another local woman with the condition, Kyleigh Dachos.

Dachos, 27, of Byfield, was just diagnosed in January. Since she was a child, she has had symptoms that include an intolerance to exercise, sitting and standing; severe fatigue; joint pain; headaches, dizziness and fainting; palpitations; memory concentration problems; hypermobility; and chemical sensitivity. She recently had surgery because her chest was crushing her heart.

“I can breathe now, but I still have heart issues,” she said.

Though she ended up having the surgery in Boston, Dachos credits Dr. Hal Dietz, a cardiologist at Baltimore’s Johns Hopkins who is studying the vascular form of EDS, with saving her life.

“He told me, ‘You have the equivalent of a 600-pound gorilla sitting on your chest, we have to get it off.’”

Though she says EDS has affected her career, relationships and all activities, Dachos has kept an upbeat attitude.

“I stay positive through the small and simple things in life,” she said. “I trust that things will work out.”

She keeps herself busy with her online Amazon business, BlueSeaRoses, where she sells books and other media that people donate to her. She also enjoys photography, art and helping the environment. Her dogs, Jack and Casey, also provide comfort, she said.

Dachos, who has been researching EDS since her diagnosis, has applied for a scholarship to attend the Ehlers-Danlos National Foundation Learning Conference in Rhode Island this August.

The Cleavelands have attended in the past and said it helped them realize they were not alone.

“Going from a place where you don’t know anyone else with what you have to a place with hundreds, it’s just a big mind shift,” Craig Cleaveland said.

Because EDS can affect every part of the body, finding doctors to treat it can be difficult, Diana Cleaveland said, and patients have to be their own advocates.

“We spend the wee hours of the night researching,” she said. “The doctors will say, ‘Who’s driving the bus?’ and you laugh at them and say, we are.”

This is the second year that Cleaveland has applied for and received the proclamation from Patrick. Other states have done the same, and Cleaveland is hoping the month will be turned into a national event.

“This is a way of unifying people,” she said. “We’re all in the same boat. The more people that can bail, the better.”

Representatives from the support group, which has more than 300 members, are going to the Statehouse for an awareness event on Wednesday at 2 p.m. The public is invited.

“We’re just going to go and meet and thank the staff,” Cleaveland said.

The group will also have a table set up at Brigham and Women’s Hospital next Friday, May 24, from 8 a.m. to 5 p.m.

To attend the Statehouse event, RSVP to Cleaveland at oriablue@gmail.com before Monday”

Diana has been very active in her New England EDS Support group and with the team at www.edsawareness.com.

Click here for more EDS proclamations on our map