Dad Discovered With EDS While Tying His Shoes 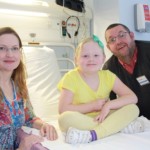 Dr Sobey with Ian Redfern and his daughter Evie

A DAD from Sheffield lived with a rare disease for four decades – until he was diagnosed by a doctor who spotted him tying his shoelaces with his wrists bent at an unusual angle.

But Ian had shown no sign he might carry the hereditary genetic condition until Evie’s doctor at Sheffield Children’s Hospital, Glenda Sobey, spotted him lacing his shoes.

Ian said he had ‘no clue’ he carried the syndrome as well, and Dr Sobey said she had never before seen anyone who has lived with the condition completely unknowingly.

“We were so relieved when Evie was diagnosed as we knew there was something wrong with her,” said Ian, a butcher from Ecclesfield. “It was so strange to see the way her skin broke when she was bumped.

“But I never expected the doctor to say I had the condition too.”

There are several types of the illness, which affects just one in 5,000 people. It is caused by a defect in the body’s protein collagen, which provides strength and support.

The disease also causes hyper-mobility, where joints and ligaments are ‘slack’. Dr Sobey, the hospital’s lead clinician for EDS, ran tests on Ian after spotting the unusual way he tied his laces – a sign of hyper-mobility.

“It is so rare for someone to live with Classical EDS and not know,” she said. “The condition is usually diagnosed in early childhood.

“I have never seen a case before where a parent had Classical EDS but didn’t know.

“There is no cure, but lots of preventions. Evie now wears special tights to school to protect her legs, and Ian now has annual heart checks.”

Ian said the syndrome is now part of his family’s normal life, adding: “Although I can’t help but feel responsible for Evie having the condition, in a way it’s nice that we can share it and I can support her through it.”

We welcome comments and Likes regarding this story