“Coronation Street” is a important TV program for EDS awareness in the UK. A new storyline depicts the character “Izzy” as a newly-pregnant woman with Ehlers Danlos Syndrome.  This will help the public understand EDS issues that may be encountered during pregnancy. 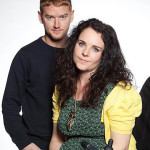 Gary Windass is now over the moon at the prospect of becoming a father on Coronation Street. And life is pretty good as well for actor Mikey North, who plays him.

But North’s world was shaken up when his wheelchair-bound girlfriend Izzy Armstrong (Cherylee Houston) revealed she was pregnant.

“At first it took him by surprise because it kind of came from nowhere,” says Mikey. “But now he’s come round to it and he’s the happiest guy alive. He can’t wait to be a dad. Gary and Izzy’s hearts are set on having a baby now.”

North  admits at times he feels like the happiest guy alive as well – particularly working on such a long-running show as Coronation Street with its talented cast, including Cherylee.

“I love working with Cherylee as she’s brilliant,” North enthuses. “She’s an inspiration as she goes through so much every day just to get into work and to give the level of performance that she does. I love her to bits and can’t speak highly enough of her.”

At the age of 23, Cherylee was diagnosed with the rare connective tissue disorder, Ehlers-Danlos syndrome, and has been confined to a wheelchair ever since.

and wanting to start a family.”

North is relishing the chance to delve into another big storyline. This follows on from his character joining the army and the issues that subsequently surfaced for him. North reveals he gained a surprising inspiration for these scenes.

“I was walking down the street and this man, Jim Baker, started pointing at his poppy and laughing, so I went over and spoke to him,” recalls North.

It turned out that Jim was from the British Legion and recognised North in his role as Gary.

“We became good mates,” says North. “He took me under his wing and gave me all the advice I needed.

“The British Legion offices were next door to the Granada studios, so I’d pop over for a coffee in the afternoon, if I had a few hours off, and speak to him about the scripts.”

Viewers saw new recruit Gary head off to fight in Afghanistan  – and then watched his mental anguish when he returned home injured, having witnessed the death of his best mate, Quinny.

Gary also suffered flashbacks and claustrophobia, and terrified Izzy when he locked her in their house – all signs of Post Traumatic Stress Disorder.

As North has found, PTSD is common in soldiers who have returned from war.

“Jim is in his 60s and served in Northern Ireland, and has told me stories you wouldn’t believe,” says North. “One guy had returned home a long time ago but one day a tyre burst on the street and he hid behind a wall. In that instant, he thought he was back there again.”

North “worked his socks off” in a bid to do that storyline justice.

“You’ve got to get it right. The biggest compliment is when you get real guys from the army telling you you’re doing a good job.”

Gary has matured a lot from his early days in Weatherfield.

“Gary was a little so and so at first,” laughs North, 27, who has now become a Coro cast regular.

When North landed his Coro Street role, he had to adjust from being an anonymous, jobbing actor

to being recognised everywhere.

“Your life changes overnight,” he says. “You do get used to it but there are times when you wish you could go back to how you were. When you’re out… you’re very aware that you’re being watched.”

Being noticed was, perhaps, North’s destiny. Had he not been an actor, he might well have been helping England win the Ashes.

“I played cricket for Yorkshire in my teens and had to choose which path to go down,” North reveals.

But one ambition he never had was that of his TV alter ego.

“I haven’t got the bottle to be a soldier. I have utter admiration for the guys that do it. They’re far braver than I could ever be.”

Click here for the source of the original article