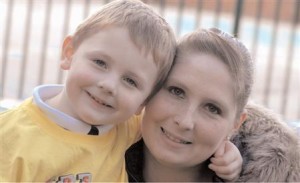 Lewis, four, is currently undergoing tests to determine if he has the most severe, vascular form of the condition which could be life-limiting.

He has reduced immunity from ailments and struggles to walk far, but soldiers on with a smile on his face, mum Emma Green said.

The 24-year-old, of Cotonfields, has been supported throughout the family’s ordeal by Ehlers-Danlos Support UK and next week she plans to thank the charity with a fund-raising and awareness day in Stafford town centre.

She said: “I feel guilty because we gave it to him – it came from me and his dad.

“He is also being tested for autism and hasn’t got an immune system. But he never complains.

“The charity has offered us emotional support; without them I don’t know what I would have done. They have also just had a conference where I met other parents in the same situation.

Stafford Street clothing store Trendeez is hosting the Hal- loween-themed charity event on Thursday, October 31, from 10am. There will be fun for all the family including pumpkin carving and a raffle.”

A fund-raising and EDS awareness day is being planned at Stafford town centre in the UK.