Cerasani is Getting Help From the ILC Foundation in Canada

Cerasani has Ehlers-Danlos syndrome and is getting financial help from the  ILC Foundation in Canada. 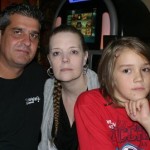 “Organizers of a fundraising event intended to help an Oakville woman living in chronic pain said they need the public’s help more than ever after thieves stole the money they had raised so far for her treatment.

The event, which is being put together by the Improving the Life of Children (ILC) Foundation, will be held at Shakers Tap & Grill, 580 Kerr St., on Saturday, Sept. 14.

The fundraiser will help the restaurant owner’s wife Joanne Cerasani, 39, who has Ehlers-Danlos Syndrome (EDS) an inherited connective tissue disorder.

Cerasani talked to the Oakville Beaver about her condition during a recent interview at Shakers.

Cerasani is unable to walk without the aid of others and is helped to a table by her husband Tony Coelho.

Tears well up in her eyes at times as she winces against an unseen pain.

At one point, her shoulder spontaneously dislocates and her fingers cramp to the point where someone else must physically straighten them out to relieve her agony.

Her lower body is covered in bandages concealing 14 abscesses in her skin. This is all part of EDS, she said.

“Living with EDS is something I wouldn’t wish on my worst enemy,” said Cerasani.

“You never know what to expect with EDS on any given day. You could be talking and walking one day and the next day be drifting in and out of consciousness or being very incoherent. There’s excruciating pain, a lot of dislocations. With my complications, I can’t eat; I can’t swallow properly. I get very bad headaches, joint pain, spinal pain. It hurts to even have my head sit on my shoulders. It’s tough… It’s really, really tough to live with.”

Cerasani said some of these symptoms date back to when she was a child, but the really debilitating ones did not show themselves until she gave birth to her son Dylan about 11 years ago.

The disorder, she said, impacts virtually every aspect of her life.

She must eat through a feeding tube and has never been able to pick up her son or anything else heavier than 10 pounds (4.5 kilograms).

She said the disorder has robbed her of any kind of independence as she must ask for help to use the bathroom or even get out of bed.

It was pointed out that Shakers was purchased with the intention Cerasani would run the kitchen, however, the onset of her disorder quickly ended that dream.

The ordeal has also been a difficult one for Cerasani’s family with Coelho stating it is difficult for him to see his wife in pain and not be able to do anything about it.

Sandy Smeenk, executive director of the ILC Foundation, said that because EDS is so rare, doctors in Canada often misdiagnose it and don’t know how to treat it when a case is confirmed.

Coelho said his efforts to get treatment for his wife in Canada have hit a dead end with the couple visiting Toronto Western, McMaster, Women’s College and other hospitals to no avail.

“I feel the only thing they’ve done is medicate her for pain,” said Coelho.

“They really haven’t treated her for the disease or help her get to a better state of life.”

For this reason, Cerasani is looking to a special centre in the U.S. for help.

Smeenk described this Maryland centre as “unique” in its treatment of EDS, stating the doctor there has succeeded in performing surgeries that offer EDS patients some degree of relief.

The problem is, Cerasani says she can’t afford the vast costs to go to the Maryland centre for treatment and this is why ILC has decided to hold a fundraiser.

The event, which will feature a variety of musical performers as well as a visit from TV star Mike Holmes and his crew, attracted considerable attention with Coelho selling around 200 tickets and raising $4,000 over eight weeks.

Then came the Saturday, Aug. 25 break-in at Shakers, which not only saw thieves break into an ATM on the premises, but also make off with all the fundraiser money.

“I was extremely shocked,” said Coelho. “When I walked in my first thought was ‘the fundraiser money.’ We also lost vouchers and gift certificates that people donated. There was so much in that envelope related to the fundraiser.”

Despite what Coelho is calling a ‘stumbling block’, the fundraiser is moving forward and will runs from 2-8 p.m.

Tickets to the event cost $20 each.

Each ticket purchased will be entered into a draw to win one of several door prizes including a three-day trip to Las Vegas.

When all is said and done, Cerasani has measured expectations and hopes concerning what will happen if she can actually seek treatment for her condition in Maryland.

“I’m praying for a little bit of relief. Anything. Just something to change — something to be different. Something to make life a little bit easier for me and for my family whether it be I can actually eat again, which would be a huge miracle, or maybe get off medication and be a little less dependent on pain control,” said Cerasani.

“I really don’t know. I guess I am just hoping for a chance and whatever that brings.”

For more information about the fundraiser or to make a donation, call 905-691-5195 or email support@theilcfoundation.org.

Those who have purchased tickets prior to the break-in on Aug. 25 are asked to bring this to the attention of Shakers staff when they arrive for the Sept. 14 event so they can be issued a new ticket that will allow them to participate in the door prize draw.”

Many of those with Ehlers-Danlos Syndrome need to travel to the US to get diagnosis and treatments.

We appreciate  your Likes and Comments