We are very excited about the addition of our first Australian Group to our Ehlers Danlos Syndrome Support Group Family! 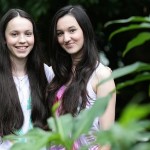 BATTLE: Cairns sisters, Elyshia, 18 and Emily Hicky, 15, both have a rare connective tissue disorder and are desperate to attend Australia’s first Ehlers-Danlos Syndrome Conference being held in Sydney in July.

Elyshia and Emily Hickey may appear to be typical, healthy teenage girls.

On the inside, however, they are battling a rare genetic disease that has given them the joints of elderly women.

The Cairns sisters, aged 18 and 15, have Ehlers Danlos syndrome, which is caused by a defect in the way the body makes collagen in connective tissues. The disorder mainly affects the skin, joints and blood vessel walls, essentially turning the girls’ joints to jelly and leaving them with overly flexible joints and stretchy skin.

The long-limbed sisters are prone to joint dislocations, which has left them, at times, unable to lift heavy objects, or even walk on the beach.

At other times, they have been unable to breathe or talk properly.

“They can just be doing things around the house and their joints will dislocate – fingers, toes, shoulders,’’ their mother Sherri said.

“If Elyshia brings a heavy bag of groceries in, her fingers just dislocate.

“Sometimes the ligament in her tongue will dislocate and she can’t talk.”

US figures show the condition affects one in 5000 people.

Elyshia – who was once a cross country and athletics champion – experiences bouts of pain so severe she will be unable to walk. She has had eight operations in six years due to EDS, most from recurring hernias.

The family has flown around Australia in search of treatment, unable to find proper specialists in Cairns.

The girls’ best chance for proper treatment will be at Australia’s inaugural conference on Ehlers-Danlos syndrome and other related disorders, to be held in Sydney from July 19-20.

Elyshia also has appointments with four specialists in Sydney in the same week.

The family, however, is in need of a sponsor to assist with flights and accommodation.

Sherri said if her daughters were able to attend, they would receive advice from the world’s best specialists for the disorder, such as US-based Brad Tinkle.

The family is also backing attempts to bring a Ronald McDonald House to Cairns, saying the charity is of immense support to sick children and their families.

Elyshia recently spent three months in hospital after she dislocated a rib.

“I just got off the lounge,’’ Elyshia said.

The sisters are hoping to start a local support group for fellow EDS sufferers, believing there to be at least half a dozen others in the Far North.

To help the girls attend the conference, or to join their EDS support group, contact Sherri Hickey at sherri.63@hotmail.com.

We are excited to learn about Australia’s inaugural conference on Ehlers Danlos syndrome to be held in Sydney on July 19-20th.