Brave UK Teen Takes Her Ehlers-Danlos Fight to the Government

This courageous teenager is promoting Ehlers-Danlos Syndrome Awareness in the UK. 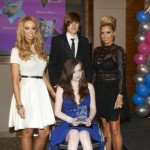 “A brave teenager whose condition leaves her in chronic pain is taking her fight to the Government to raise awareness about the issue.

Bethanie Thorn, 17, of Broomfield, Silver End, was diagnosed with Ehlers-Danlos Syndrome (EDS) in 2011, and struggles with digestive, heart and mobility problems for which she has to take 29 different medicines.

Along with mum Julie, 41, she has launched an e-petition, which could be discussed in the House of Commons if 100,000 people sign it before December 18.

They hope it will raise awareness of the condition, which affects about one in every 5,000 people, and the petition has already received more than 1,000 signatures.”

This UK petition is similar to the the state wide EDS Awareness  Proclamations we focus on issuing in the US.