Claire is an inspiration to all of us.  She continues to compete despite her major struggles.

I have a complicated medical history which made my life change overnight. I’ve overcome a lot of obstacles to be where I am. 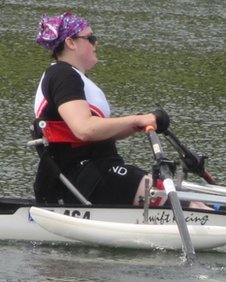 In 2004, I had just started university, and joined my college rowing team. I was hooked immediately and shown to have potential.

I joined the university’s development camp, loving it and winning my first regatta. I then returned to university hoping to join the university squad, but just before term started, I was struck down with glandular fever.

This led to me becoming mostly bed-bound, unable to manage anything but the most basic tasks. I fought my way through university, and graduated.

As time progressed, I became physically worse, eventually needing to use a wheelchair full-time.

I was finally diagnosed with a rare disorder called Ehlers Danlos Syndrome. By then I had given up on ever getting back to rowing, it seemed a world away.

Whilst becoming physically worse, I developed severe problems with my digestive system. I was unable to tolerate anything orally, becoming malnourished. I received nutrition by a tube into my small bowel. This improved my life greatly.

I went to a summer fair advertising rowing, and decided that it was time to try adaptive rowing. I looked for my nearest club, sadly an hour from me. They welcomed me with open arms, and I began to start rowing as an Arms and Shoulders para-rower.

Sadly my return was short-lived, as my bowel began to fail, making me seriously ill, leading to another long stay in hospital.

This time I began to be fed intravenously, on total parenteral nutrition. After recovering my strength and becoming stable I was back in a boat, feeling really well.

I raced six weeks after my discharge and won my first race. This was followed two weeks later at the British National Championships where I came second to an experienced rower, but beating experienced rowers as well.

My success has continued this season, winning at the Marlow Regatta, and the Home International Regatta, where I also took two minutes off of my previous time there, giving me a massive PB.

I want to be a Paralympian with all my heart and mind, the first to be fed intravenously. I refuse to let my health impairment stop me from reaching my dreams.

Learn more about Claire and her promotion of EDS Awareness in her blog about rowing.

Claire has a blog  about her rowing.