Annabelle is a Spirited Young Girl With Vascular EDS

Annabelle’s story has raised much publicity for VEDS! This brave young girl is now attending and enjoying school in spite of her struggles with VEDS. 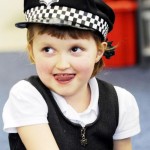 “SHE has become something of a Bury celebrity — the spirited young girl Annabelle with the wide smile for whom a bump in the playground could be fatal.

A ‘ticking timebomb’ is how her parents describe five-year-old Annabelle Griffin’s incurable and life-threatening condition.

The youngster was diagnosed with Vascular Ehlers-Danlos Syndrome (VEDS) — a collagen deficiency which puts her at risk of the spontaneous rupture of her internal organs and arteries – in December, 2012 aged three.

Doctors told parents Jared and Sarah Griffin, of Wilby Close, Brandlesholme, to “wrap Annabelle up in cotton wool” but they were determined to let her lead as normal a life as possible.

Against the odds, she has nearly completed her first year at a mainstream primary school — something her parents were unsure would ever happen.

Local authority funding has allowed Woodbank Primary in Bury to employ a one-on-one helper for Annabelle — ex-classroom assistant Justine Leader, who in school hours is the youngster’s guardian angel.

Mum Sarah, who left her job to look after Annabelle full-time when months of testing revealed the devastating news of her diagnosis, is full of praise for Justine and the support of seconded headteacher Geraldine Woodward.

She said: “Without having one-to-one help, it would have been impossible for Annabelle to attend a mainstream school, as no teacher would have been able to give her the attention she needs for her own safety.

“It would not have been fair to put that responsibility on them.”

Annabelle is one of the youngest people nationwide to have been diagnosed with VEDS and only 300 people in the UK are currently known to have the condition.

Jared and Sarah have no idea of Annabelle’s life expectancy and have had to come to terms with the fact that something serious could happen to her at any time.

Sarah added: “We want her to experience what any other normal child can, but there is not a day when you do not get up and have to worry about her and the condition.

“Some people don’t know how to act, because they can’t visibly see what is wrong with her.”

Jared and Sarah also have two teenage sons, Ryan and Oliver, and have been campaigning tirelessly to raise awareness of VEDS for more than a year.

“We want Annabelle to have access to everything the other children have.”

May is EDS Awareness Month. For more details go to ehlers-danlos.org