Ehlers-Danlos & the “Spoon Theory” get attention on BBC News

Many EDSers use the “Spoon Theory” to explain their fatigue and limitations due to the acute-chronic pain cycle.

BBC  News presents a series on “insights into disabled life” which shares the “Spoon Theory” with the public audience.  We hope this will increase awareness & understanding of  the compromises we EDSers must make to manage Ehlers-Danlos Syndrome.

“Some people have boundless energy and stamina. Those who don’t, due to disability, find it difficult to explain their energy levels and have to deal with people who think they’re lazy. And that’s where spoons come in.

What is “spoon theory”?

It’s a quirky and easy to understand way of explaining how much energy you have left.

A growing number of people with stamina difficulties, such as those with ME, fibromyalgia, Ehlers Danlos syndrome and mental health problems, use spoons to quantify how they are feeling on a given day. It’s not really possible to measure energy levels scientifically but this unit of measurement – numbers of spoons – is a fun explainer.

Some causes of low stamina

How does cutlery come into it?

Christine Miserandino came up with the idea in 2003. She has lupus and, when describing her predicament to a close friend in a cafe, grabbed some nearby spoons as props.

They counted out 12 spoons and Miserandino explained that daily tasks such as eating breakfast cost her at least one of those spoons, and showering used up two.

The term snowballed on the internet and since Miserandino blogged about her spoons in 2010, her Facebook page has gained more than 58,000 likes and upwards of 10,000 people have added a supportive Twitter ribbon or Twibbon (a picture of a silver teaspoon) to their profile picture. 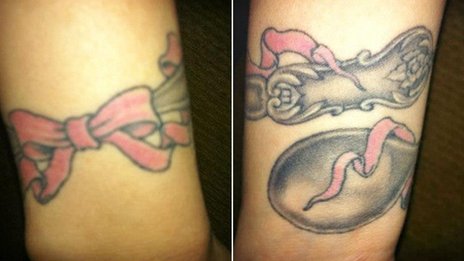 Does it do more than explain energy levels?

It is something people now identify themselves with and have built a community around. The word “spoons” has started to crop up in the everyday language of people with stamina problems – and it’s getting creative.

People who use the spoon theory call themselves spoonies.

You might hear someone say they’re running low on spoons.

And if spoonies use up more energy than they really have, and get excessively exhausted as a result, it’s known as getting into “spoon deficit”. Miserandino has what she calls a “scheduled crash landing” in these situations, a rest period to get over non-standard events such as weddings or hospital trips.

She says her days are about pacing herself and deciding in advance which tasks are worth “sacrificing a spoon” for.

She has a tattoo of her daughter Olivia’s baby spoon coiled around her wrist. She had it done to remind her to prioritize her tasks, to ask herself: “Is it important to put away laundry with the energy I have, or to spend time with Olivia and read her a story?”

When a photo of the tattoo was posted on Miserandino’s blog, more than 100 people responded with pictures of their own spoonie body art. Seventy-five of them appeared on this video posted on YouTube.

Can I join in?

The #spoonie Twitter hashtag is being used by those who want to reach out to each other and be understood. If you tweet about your dwindling energy levels, why not tag it?”

The “Spoon Theory” helps us explain why EDSers must carefully plan their days. We have to pace ourselves and make some really difficult decisions –  considering how each decision will affect our body. The “Spoon Theory” also helps us evaluate our energy & pain levels.

Read a full explanation of Christine Miserandino’s Spoon Theory, or visit her website But You Don’t Look Sick.