This is a very touching story about 5-year-old Matthew’s struggle to understand his Type IV Ehlers Danlos Syndrome. “It’s really sad to say my wife knows more about it than the doctors,” says his father, Joshua, who was diagnosed last year. At 33 years old, he finally discovered the reason for his multiple vascular ruptures. His son is still learning what their diagnosis means. 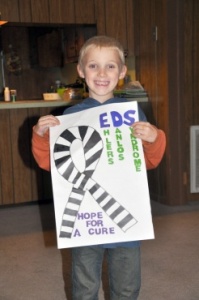 In this Oct. 15, 2014 photo, Matthew Johnfroe, 5, holds up an awareness poster his mother Stachia Hagaman, drew in his home in Lenoir, N.C. Last year his family learned that Matthew suffers from type 4 Ehlers-Danlos syndrome, a disorder that makes the tissues in his small body thin, meaning even a small scrape requires two or more adhesive bandages. A fall or bump could rupture anything in Matthew’s body, such as his arteries or any of his organs, said his mother, Stachia Hagaman. (AP Photo/The News-Topic, Lex Menz)

LENOIR, N.C. (AP) — Matthew Johnfroe, 5, sat in the living room floor with a blue marker scribbling away at a piece of paper. He drew two curlicues meant to be wheels, a box with the number 16 on it, and a figure with a circle for a torso and squares for arms and legs walking out of the box.”That’s me getting off the school bus,” Matthew said.

Matthew loves to draw and play video games, but he would rather play football or ride his bike with his friends. But, one slip of the bike tire or one hit during a football game, and Matthew’s life could be in immediate danger.

“I have to be gentle,” he said quietly.

Last year his family learned that Matthew suffers from type 4 Ehlers Danlos syndrome, a disorder that makes the tissues in his small body thin, meaning even a small scrape requires two or more adhesive bandages. A fall or bump could rupture anything in Matthew’s body, such as his arteries or any of his organs, said his mother, Stachia Hagaman.

Though he doesn’t entirely understand it, Matthew has been devastated by the news because having Ehlers Danlos means he can no longer play any of his favorite sports, including football and baseball. If he were hit too hard either by another player or falling on the ground, it could mean his life.

“We’ve talked to him about it. We’ve not gone into depth with him,” Hagaman said. “(We’ve said) his guts are special and they’ll break easily. Right now, sometimes he hates me. It’s every little boy’s dream, he wants to play football.”

Matthew was diagnosed last year after his father, Joshua Johnfroe, was found to have the disease. Johnfroe had never known why he had so many serious injuries. He has suffered from several ruptures, including his spleen, an artery in his stomach and his intestines, and after his diagnosis he was medically discharged from the Navy, just six years away from completing 20 years in service.

Now he knows the reason, and he also knows what his son may be facing.

“I think our biggest thing is we don’t want (Matthew) to go through the stuff I’ve been through,” he said.

Currently, there is no medication or treatment that can make their lives easier. There is no cure. Instead, Matthew and his dad must go through a series of tests every year with multiple doctors, including a geneticist, a neurologist and a vascular surgeon. Hagaman said that she has been told that people with Ehlers Danlos syndrome typically live to about 48. Johnfroe is 33.

“(A rupture) could happen at any time,” Hagaman said, her voice breaking from emotion. “We could wake up in the morning and something happen overnight to (Joshua) or Matthew. If he falls, it’s an automatic trip to the hospital.”

Ehlers Danlos is a genetic disease. A person with one parent who has it has a 50/50 chance of inheriting it. Matthew’s 2-year-old brother, Liam, does not have it.

Hagaman and Johnfroe’s biggest frustration, aside from worrying about their son, is how many people lack information and understanding about the syndrome. Every time Johnfroe goes to the hospital because something has ruptured, he has to hand the nurse a packet of information explaining his condition. He is supposed to be treated as a trauma patient because if he has to wait, it could be too late.

“It’s really sad to say my wife knows more about it than the doctors,” Johnfroe said.

Hagaman said she wonders if the school system would understand what to do if Matthew injured himself. She said she has talked with his teachers and the administration at Valmead Elementary School, but worry consumes her.

“The school has to call 9-1-1 immediately,” Hagaman said.

Matthew said he wants to be a police officer when he grows up. His parents remained sadly quiet when he mentioned it. It is unlikely he will get to fulfill that dream.

Johnfroe and Hagaman hope to raise awareness about the disease, and they pray for a cure.

Hagaman added, “They say he (Matthew) has got a slight chance that he could go his whole life without a rupture. I try to keep him in a bubble. Joshua says you have to let him live. Some days are good days. It’s always in the back of your head, but you don’t think about it. Then some days you dwell on it.”

Type IV Ehlers Danlos Syndrome is the most life-threatening type of EDS. We need to find a cure!