Michael was diagnosed with EDS at age 10. He also suffers from Dysautonomia, which is fairly common in the EDS population. He is able to remain active in basketball and track using his own wheelchair. 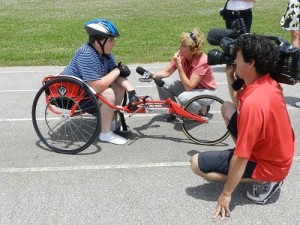 ROBERTSDALE, Alabama — “Michael Parnell, the 13-year-old son of Silverhill resident Tia Parnell, was recently presented with a racing wheelchair worth $3,500. At age 10, Michael was diagnosed with Ehlers Danlos-Syndrome and a rare condition called Dysautonomia. As a result, he has problems with his joints and suffers from a malfunction of his nervous system, which leaves Michael, for the most part, confined to a wheelchair. He recently completed his seventh grade year at Central Baldwin Middle School competing in basketball and track using his own wheelchair. Through the efforts of CBMS Principal Chuck Anderson and Stephanie Jeansonne with the Mobile Patriots wheelchair basketball team, Michael was able to receive the chair donated by the Challenged Athlete Funds. On Tuesday, May 28, Randy and Pam Chiabaroli and their son, Joey, presented Michael with the chair. Michael and Joey, with the help of Randy, Pam and mother Tia, tried out his new set of wheels that afternoon on the track at Robertsdale High School.”

Courageous kids, like Michael, try to make the best of their life with EDS.